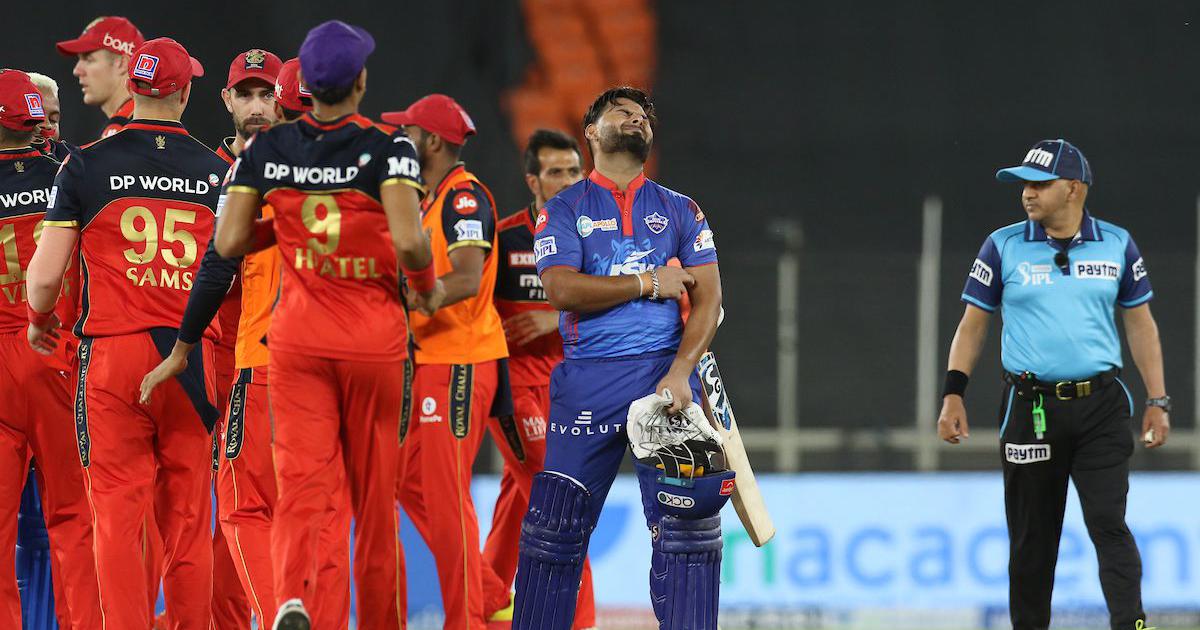 Royal Challengers Bangalore rode on an AB de Villiers special and a solid final over from Mohammad Siraj to inflict a one-run defeat on Delhi Capitals in the Indian Premier League in Ahmedabad on Tuesday.

RCB defeat DC by one run: as it happened

The victory propelled RCB to the top of the table while the Capitals slipped to the third spot.

Needing 14 off the final over, Delhi fell agonisingly short as Rishabh Pant’s back-to-back fours off the remaining two balls proved to be a couple of runs short for a win.

Shimron Hetmyer (53 not out off 25) displayed some sensational hitting while batting alongside Pant (58 not out off 48) but they could not take their team over the line.

Chasing 172, the Capitals were reduced to 28 for two in 3.3 overs as all-rounder Kyle Jamieson and Siraj and sent Shikhar Dhawan (6) and Steve Smith (4) packing respectively.

Just when it looked young Prithvi Shaw (21) and Pant, who survived a leg before scare on 9, were navigating their way, Patel, the tournament’s leading wicket-taker, struck, getting rid of the former with the Capitals managing 43/2 in the first six overs.

As boundaries dried up, Pant and new-batsman Marcus Stoinis (22) kept the scoreboard ticking by taking singles and doubles on offer.

With the required run rate increasing both batsmen indulged in shot making. Stoinis took on Washington Sundar in the 12th over, hitting two fours while Pant smashed Patel for back-to-back boundaries in the next over.

However, an edge resulted in the Australian all-rounder walking back to the dug out as wickets continued to tumble at regular intervals.

The big-hitting Hetmyer joined his skipper in the middle. The West Indian was dropped on 15 by Devdutt Padikkal.

With the Capitals needing 46 of the last three overs, the batsmen plundered 21 runs that included three massive sixes by Hetmyer in the 18th over bowled by Jamiseon but it wasn’t meant to be in the end.

De Villiers, who hit three fours and five sixes, was the top scorer for RCB.

The veteran South African hit 22 runs off the last over bowled by Stoinis (0/23) that included three sixes, during a knock that saw him cross 5,000 runs in the tournament.

Pacer Avesh Khan provided the Capitals with the first breakthrough, dismissing the RCB captain for 12 in the fourth over. In the very next ball, Ishant, playing his first match of the season, got rid of the dangerous Padikkal.

With two new batsmen in the middle, the seasoned speedster went on to bowl a wicket maiden to slow down the proceedings as RCB collected 36 runs for the loss of two wickets in the Powerplay.

Maxwell played a short cameo, smashing two maximums and a boundary but was caught at long on by compatriot Smith off leggie Mishra as RCB reached 68 for three at the hallway mark.

Patidar, who hit 31 off 22 deliveries, and de Villiers steadied the ship by stitching a 54-run stand but all-rounder Axar Patel, who accounted for the Indian in the 15th over.

Barring de Villiers all RCB batsmen were guilty off not capitalising on good starts, but his fireworks at the end proved decisive enough. Pant, despite remaining unbeaten on a half century, struggled for large parts of the innings to find momentum and that, coupled with a massive last over for RCB, proved decisive in the end.