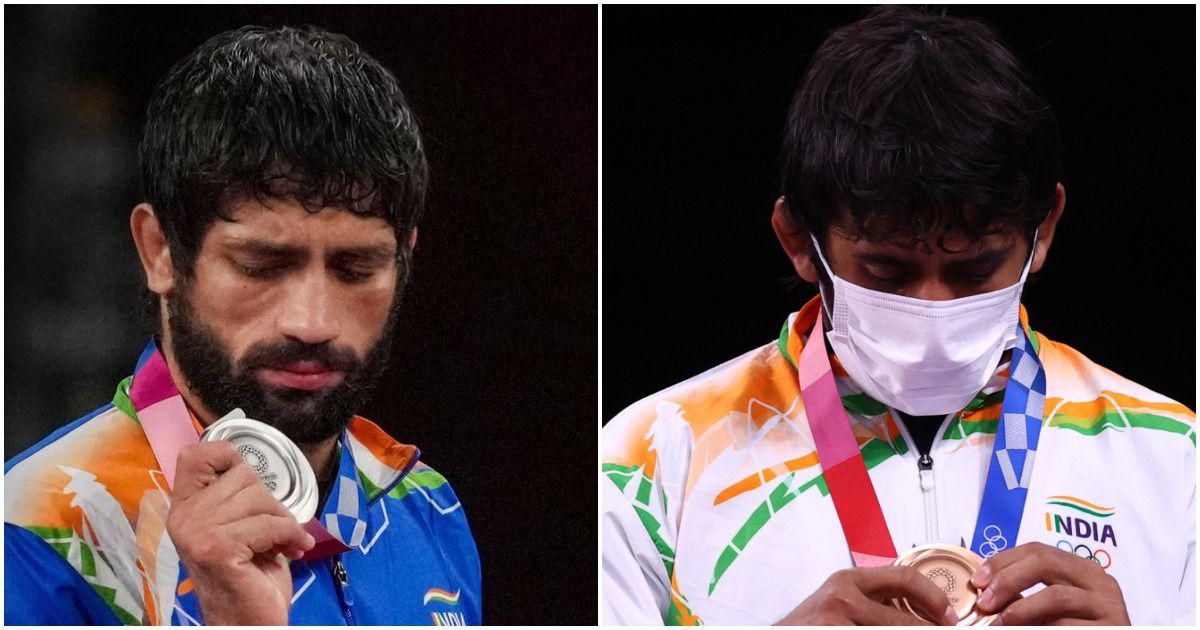 We had to wait till the closing ceremony to catch a glimpse of Ravi Kumar Dahiya and Bajrang Punia smiling. On the podium, on the mat, they had cut such stoic figures that one might have thought that had bitterly failed.

Instead, Dahiya had won a rare silver and Punia, an equally valuable bronze. Olympic medals don’t come along easily for India but perhaps their reactions were only an indication of the expectations they had from themselves.

For them, it wasn’t about what others wanted from them. It was about what they wanted for themselves. A silver would have pleased most. A bronze is special too. But they had their sights set higher… on gold.

With Dahiya, you could feel it. The anguish was clearly visible. As he stood on the podium, he just couldn’t break into a smile. He was happy but he had wanted more.

He lost to reigning world champion Zavur Uguev, a wrestler who has dominated the weight category for almost four years now. Try as he might, he wasn’t able to breach the defenses of a man who has made it a habit of not losing big finals.

“I did not come to Tokyo for a silver medal. It will not give me satisfaction. Maybe this time I deserved only a silver because Uguev was a better wrestler today,” Dahiya said. “I could not achieve what I wanted to.”

He had an almost vacant stare at the podium and then as he was walked around the arena, letting the photographers take pictures. From point A to point B and then more, Dahiya had his stone face on… not letting any emotion escape.

“I am happy with the silver medal, but I wanted to win the gold. Our wrestlers have won silver and bronze medals in the past and the only medal left to win was gold. I wanted to win that. For some time I was sad, but then I told myself that there will be a next time for me,” Ravi told The Times of India in an interview.

He further added: “I am promising this – I will win a gold medal in Paris. I am just 23 and have a lot left in me. After going home, I will spend some time with my family and then will start practising and get back to my daily wrestling routine. Paris is my next target.”

It wasn’t very different for Punia. In fact, it was worse. Dahiya is a talented wrestler and those who have followed him knew that he would go far, but he wasn’t the face of the squad as Punia or Vinesh Phogat were.

But unknown to most watchers, Punia was handicapped by a knee injury even before the event began. At a tournament in Russia, Bajrang twisted his right knee. His camp kept it quiet though – they didn’t want his opponents to know. He didn’t even tell his parents and stayed off the mat for 25 days leads leading up to the Olympics.

However, when he took to the mat for his bout with heavy strapping around his right knee, it was clear that this wasn’t the same Bajrang. The movement was sluggish and he wasn’t able to attack the legs as he usually did.

He still got two wins to make the semi-finals – one bout away from a certain medal. But then was dominated by veteran Haji Aliyev and lost 12-5.

“The tapes on my knee made it harder for me on the mat but my physio told me that if I played without it, the injury could have got worse. I couldn’t take that risk in the first two-three bouts, so I played on,” Punia said in an interaction on Sunday before the closing ceremony.

Then, before the bronze medal match against the third seed Daulet Niyazbekov, he decided to go for broke and put his body on the line. The knee straps came off and while it would allow him to move more freely, he was also risking an injury layoff.

“I felt injury can be healed later, but medal had to be won now. So, I requested my doctor to let me play without tapes and let me give my absolute best,” he added.

To some, it might sound as if Punia was making an excuse but one could see he was bitterly disappointed with the bronze. Surely, he must have been thinking whether he should have fought against Aliyev without the strapping… would the result have been different? That thought itself can be depressing… the ‘what if’ scenarios are always the worst.

“I am upset that I couldn’t fulfill the nation’s expectations,” he said.

While that was one part of the argument, the other was simply was the athlete wants from himself. So often, we let ourselves be defined by the limits of our thinking.

Going into any big competition, the athlete sets a goal. It could be a personal best, a season best, reaching the semi-final, the final, a place on the podium or a gold medal. It could be anything based on how the athletes perceive their own quality.

Punia and Dahiya left no doubt about how they saw themselves and where they wanted to be – not third, not second… just the best. Perhaps, like Neeraj Chopra, they saw no reason to go for anything less than gold. That explains the disappointment but at the same time also raises hope because they won’t stop until they achieve their goals.

Given that they are already so close to being the best, one can only hope the medals will inspire them to reach for the top even more. After all, the view from the very top is a pretty special one.