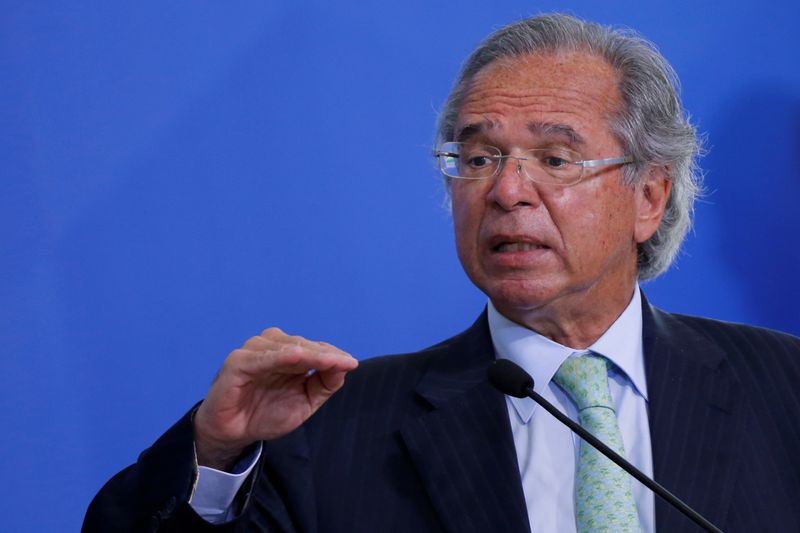 BRASILIA (Reuters) – Brazil’s real is now at a more “favorable” level and is likely to strengthen much further, Economy Minister Paulo Guedes said on Wednesday, the day the currency hit a one-year high of 4.9386 per dollar.

In an online event hosted by the Sao Paulo Federation of Industries, Guedes said a “consistent and coherent” policy mix will push the dollar further below 5.00 reais and help keep the long end of the interest rate curve under control.

“The exchange rate now is much more favorable … but the equilibrium (dollar/real) rate is possibly much lower than where it is just now,” Guedes said.

“It (equilibrium rate) is well below the current level, which for the first time (in a year) is breaking below 5.00. I think it is going to go much lower, as everyone sees (our) consistent and coherent policies,” he said.

The real has surged almost 20% since trading at 5.8760 in March, coinciding with the central bank beginning an interest rate-hiking cycle that now looks much more aggressive than initially planned.

The dollar fell as low as 4.9386 reais on Wednesday. A growing number of analysts have revised up their outlook for the real in recent weeks, with some expecting the dollar to fall as low as 4.50 reais in the second half of the year.

Guedes repeated the government’s commitment not to break its spending cap rule limiting public spending growth to the previous year’s rate of inflation, although he noted that current high levels of inflation give it a bit more leeway.

President Jair Bolsonaro is expected to announce a three-month extension to emergency cash transfers for the poor soon, perhaps as early as this week, Guedes said.

On tax reform, Guedes said total receipts will be very strong with the economy expanding around 5%, which is now the broad 2021 growth consensus. Strong tax receipts will allow the government to cut taxes “immediately”, he said.