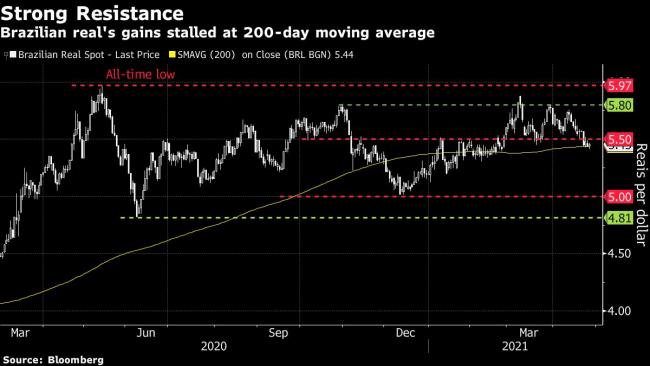 (Bloomberg) — Analysts and investors say the Brazilian may have room to rise to its strongest level in almost a year as hopes of progress on reforms and early signs the pandemic’s new wave may be starting to ease fuel optimism.

The real has advanced 4.2% in the seven days through Wednesday, the most among 31 major currencies tracked by Bloomberg and putting it on track for the first positive month this year.

The currency recently breached the key 5.50 per dollar level and is now hovering around its 200-day moving average of 5.44, which has limited additional gains. Traders say a breach of that barrier would open room for an appreciation toward the 5-per dollar psychological level.

While Brazil is still one of the hardest-hit countries in the world, the daily number of Covid-19 cases and deaths has slightly decreased since reaching records in March, and ICU occupancy rates are starting to decline. The pace of vaccinations accelerated in April to an average of 765,000 per day from 470,000 in March, though it’s still short of the government’s goal of 1 million.

The relief on the pandemic front was key for the real’s rebound, said Luiz Fernando Figueiredo, the chief executive officer at Maua Capital in Sao Paulo and a former central bank director. He said the currency could appreciate to 5 per dollar if there are no negative surprises on the fiscal front.

Hopes that the government will move forward with its reform agenda after solving the budget gridlock are also fueling bullish bets. Brazil’s house speaker Arthur Lira said this week the tax and administrative reforms could be approved by the end of the year.

Signs the economic agenda is moving forward could also propel the real to strengthen to 5 per dollar, said Carlos Menezes, a portfolio manager at Gauss Capital in Sao Paulo.

Another positive driver for the currency is the outlook for rates. Brazil’s central bank is expected to deliver another 75 basis point hike next week and swap rates price in 250 basis points in additional tightening by the end of the year, which would take the benchmark rate to 6%, the highest since mid-2019.

Sergio Zanini, a partner and manager at Galapagos (NASDAQ:) Capital in Sao Paulo, sees the central bank lifting rates to 5.5% by the end of 2021, which would allow the real to strengthen to 5.10 per dollar. His view is subject to the Federal Reserve keeping a stimulative policy, which offers support to risk assets.

The more bullish forecasts are not a consensus, though. Economists in a weekly central bank survey see the real at 5.40 per dollar by the end of the year, little changed from current levels.

Stronger dollar inflows due to rising exports and higher commodity prices are also offering support for the currency. Brazil is headed for the highest monthly trade surplus ever, with exports exceeding imports by $8.9 billion in the first 25 days of April.

Foreign exchange inflows are positive by $9.5 billion so far this year, compared with a $13.4 billion deficit in the same period of 2020. And while the country posted a wider-than-expected current account deficit in March, the central bank said it expects a $5.7 billion surplus in April.