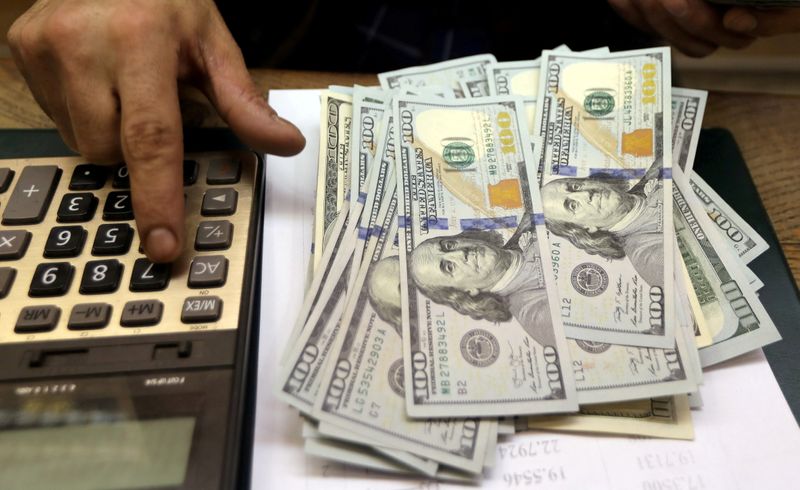 LONDON (Reuters) – The dollar slipped against a basket of currencies on Thursday as investor focus turned to this week’s Federal Reserve meeting, while cryptocurrencies jumped to their highest levels in weeks.

Cryptocurrency bitcoin jumped 10% to over a five-week high of $39,850, while ether gained 7.35% to $2,353 after London’s City A.M. newspaper cited an un-named “insider” on the weekend as saying that Amazon (NASDAQ:) is looking to accept bitcoin payments by year-end.

The report followed Twitter boss Jack Dorsey’s comment on Friday that the digital currency is a “big part” of the social-media company’s future.

The , which measures the currency against six major peers, slipped slightly to 92.833 due to pressure from the euro and yen, but was still close to last week’s 3-1/2-month high of 93.194.

It has gained nearly 4% from a recent low on May 25 as an improving U.S. economy bolstered the outlook for the Fed to start paring asset purchases as early as this year.

“We think that the Fed will have detailed tapering discussions, but without providing any concrete guidance and short of a taper warning or decision,” CitiFX analysts Ebrahim Rahbari and Lenny Jin wrote in a note to clients.

They added that there were risks for a slightly later announcement of a taper decision from the Fed – for example, out to the fourth quarter – given the added uncertainty associated with the Delta variant of the coronavirus.

The Fed at its last meeting on June 16 dropped a reference to the coronavirus as a drag on the economy.

“Given the policy divergence between the Fed and a staunchly dovish ECB, we see euro/dollar as broadly range-bound, but that this environment does not point to dollar strength,” the CitiFX analysts said.

The risks from the Delta variant continue to rise globally, with U.S. top infectious disease official Anthony Fauci saying some Americans may need booster shots amid new mask mandates and a surge in new cases.

China reported its highest number of cases since the end of January, while new infections have also spiked in Japan, where Tokyo is currently hosting the Olympics.

Australia’s most populous state of New South Wales, home to Sydney, reported a rise in new COVID-19 cases on Monday despite a weeks-long stay-at-home order.