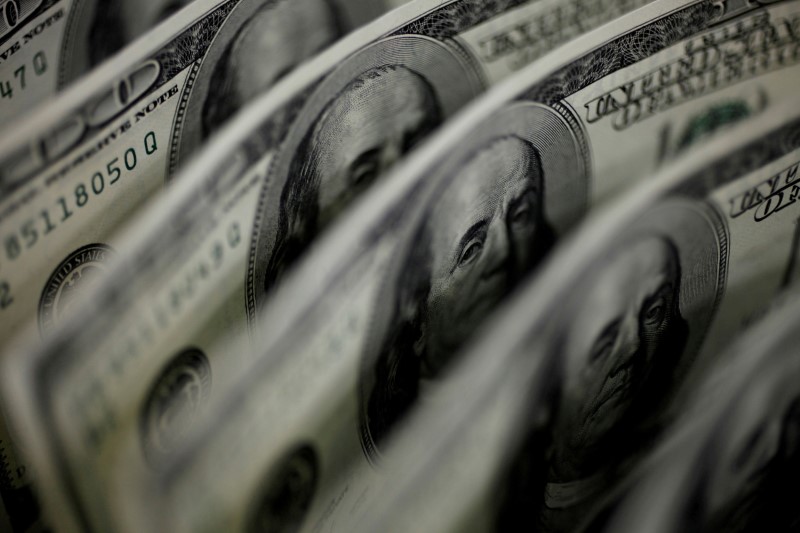 SINGAPORE (Reuters) – The dollar was headed for its best week in nearly nine months on Friday as investors scrambled to price in a sooner-than-expected ending to extraordinary U.S. monetary stimulus in the days after a surprise shift in tone from the Federal Reserve.

Since Wednesday, when Fed officials projected possible rate hikes in 2023, the greenback has surged some 1.8% on the euro and more than 2% against the Australian dollar and the negative-yielding franc as short-sellers have rushed to close positions.

The has zoomed above its 200-day moving average, hitting a more than two-month high of 92.010, and is on track for a 1.6% weekly gain, its largest since last September.

“The Fed sent a very crucial message, that the days of plentiful, abundant, unlimited liquidity are drawing to a close,” said Richard Franulovich, head of FX strategy at Westpac in Sydney.

“We can now see an end point to zero rates … and they’ve told us in very plain-speaking English that they’ve commenced the conversation on how to commence tapering,” he said. “That signal has precipitated a dramatic position unwind, because U.S. dollar shorts were based on that unending liquidity tap from the Fed, and zero rates.”

The Antipodeans were sold even lower in Asia on Friday, while other majors stabilised. The euro sat just above a two-month low at $1.1914.

The struck its lowest since December at $0.7521 on Friday and the fell to its weakest since April at $0.6982, defying eye-popping reports on Australian jobs and New Zealand growth this week. [AUD/]

The dollar is also on track for a 0.5% rise against the yen. The yen sat at 110.25 per dollar after hitting an 11-week low of 110.82 on Thursday and was little moved by the Bank of Japan keeping its main policy settings steady, as expected.

“You can often glean a sense of how the market is positioned by the way it trades,” Franulovich said. “The viciousness with which the dollar has bounced back … tells me that there’s been a decisive shift for a lot of big, stale positions. This is a meaningful, decisive re-thinking in dollar prospects.”

The shakeout has been triggered by Fed forecasts, or ‘dot plots,’ showing 13 of the 18-person policy board saw rates rising in 2023, versus only six previously, with the median board member tipping two hikes in 2023.

While the plots are not commitments and have a poor track record of predicting rates, the sudden shift was a shock that has also reverberated through the bond market and metal prices.

Gold has been walloped by rises in the dollar and U.S. yields and is on track for a more than 5% weekly loss. [GOL/]

Treasuries sold heavily, although the U.S. yield curve has flattened as traders seem hopeful that a more aggressive Fed could move more quickly to head off inflation – leading some to reckon that the dollar’s bear case remains intact. [US/]

“There may be some expectation that the U.S. dollar will see more support on the back of a higher rates outlook,” said Kerry Craig, global market strategist at J.P. Morgan Asset Management.

“While this may be the case in the very near term, it’s difficult to make the case for ongoing U.S. dollar strength as investors shift their focus to opportunities outside the U.S. and the drag created by twin deficits.”