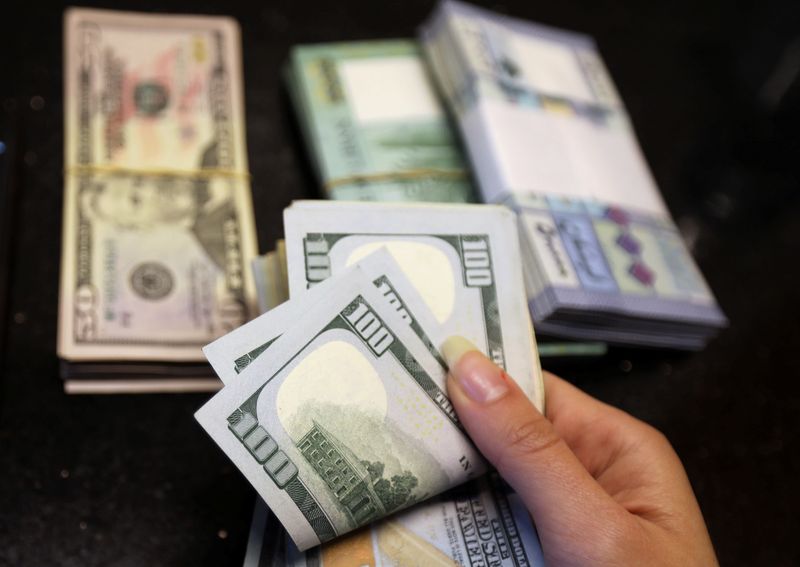 © Reuters. A woman counts U.S. dollar banknotes as Lebanese pounds are pictured in the background at a currency exchange shop in Beirut, Lebanon April 3, 2020. REUTERS/Mohamed Azakir

While moves in currency markets were much more contained than on Thursday as equity markets stabilised, the risk-sensitive Australian and New Zealand dollars fell sharply again.

The , which measures the currency against six rivals, rose as high as 93.597 for the first time since early November, before trading little changed at 93.629. For the week it is on track to gain about 1%, the most in two months.

“Trade-weighted measures of the dollar are pushing to new highs for the year. This comes at a time of bullish flattening in the US yield curve – typically representing a more pessimistic re-assessment of growth prospects,” ING currency analysts wrote in a note.

“So even though the mood music from the Fed is very much one of a glide path to tapering, it looks like a lot of demand for the dollar is coming from investors pulling out of growth stories overseas.”

New Zealand’s dipped to a new nine-month trough of $0.6807. The government on Friday extended a snap COVID-19 lockdown that delayed the central bank raising interest rates this week.

The Canadian dollar dropped to an eight-month low of C$1.2949, down 0.8% vs its U.S. counterpart as oil prices fell further because of worries about the global economy.

Norway’s crown dropped for a second day as weaker oil prices and general nervousness among investors hit the currency despite the Norwegian central bank on Thursday sticking to its plan for a September interest rate hike. The euro was last up 0.7% at 10.625 crowns.

“Equity market drawdowns and falling commodities mean one thing and one thing only, a stronger USD as investors look for a safe haven,” said Jeremy Thomson-Cook, economist at payments firm Equals Money.

Sterling slipped to one-month lows versus both the dollar and the euro.

Emerging markets have also had a bruising week. A regulatory crackdown in China and the concerns over growth and COVID-19 have sent investors looking for safer assets.