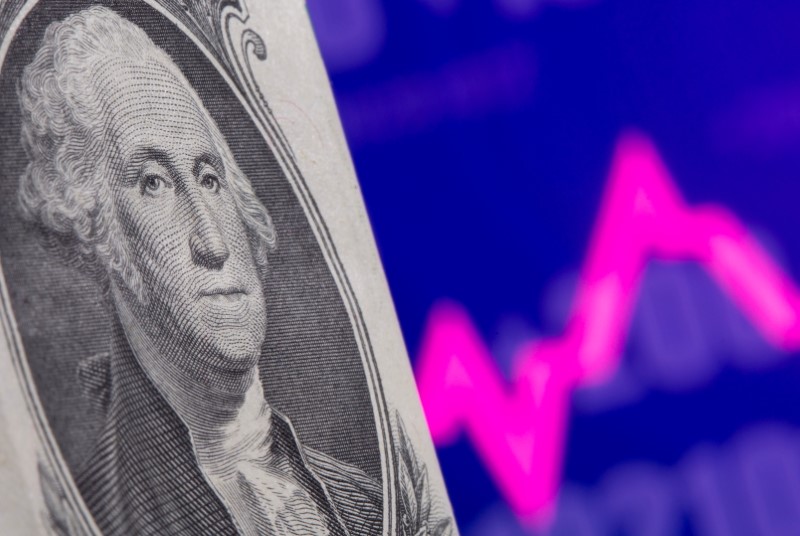 © Reuters. FILE PHOTO: A U.S. one dollar banknote is seen in front of displayed stock graph in this illustration taken May 7, 2021. REUTERS/Dado Ruvic/Illustration

LONDON (Reuters) -The dollar carried on strengthening on Thursday, reaching its highest in more than two months, after the U.S. Federal Reserve surprised markets by signalling it would raise interest rates and end emergency bond-buying sooner than expected.

Fed officials on Wednesday projected an accelerated timetable for rate increases, began talks on how to end emergency bond-buying, and said that the COVID-19 pandemic was no longer a core constraint on U.S. commerce.

A majority of 11 Fed officials pencilled in at least two quarter-point rate increases for 2023, adding in their statement that they would keep policy supportive for now to encourage a labour market recovery.

U.S. Treasury yields rose by the most since early March, while equities fell.

Having on Wednesday clocked its biggest daily gain since March 2020, the dollar was steady during Thursday’s Asian session and then extended gains as European markets opened.

“We think USD will hold on to its gains,” Elsa Lignos, global head of FX strategy at RBC Capital Markets, wrote in a note to clients.

“In order to build on those gains, we need some further positive data surprises.”

Deutsche Bank (DE:) strategists said they were closing their long euro-versus-dollar trade recommendation, which was based on the Fed being dovish.

“One thing is clear: the Fed is no longer willing to push back on market pricing nor is it as committed to its transitory inflation narrative,” the bank said in a note to clients.

“We see the combined effects as dollar bullish: there is greater scope for a front-end real rate repricing in the US yield curve rather than just breakevens, as well as room for higher volatility.”

The pound and Canadian dollar – which had benefited from the expectation that their respective central banks would tighten policy more quickly than the Fed – lost out. Both fell to a six-week low versus the U.S. dollar.

The U.S. dollar gained as much as 1.2% against the Swedish crown.

The dollar strengthened after data showed New Zealand’s economy grew much faster than expected in the first quarter. But by 1039 GMT, it was down 0.3% on the day at $0.7027.

Australia also had upbeat data, with job creation beating expectations in May and unemployment diving to pre-pandemic lows.

Norway’s central bank kept its key interest rate unchanged as expected, but said an increase was likely in September and steepened its trajectory of subsequent rate rises as the economy recovers from the effects of COVID-19.

Versus the dollar, the Norwegian crown was still down around 1% on the day, and versus the euro, it slipped about 0.4%, changing hands at 10.214.

“The path of least resistance is ultimately towards a lower euro-nokkie, but for now at least markets are struggling in the context of the bigger picture story which is obviously dominated by the dollar,” said Jeremy Stretch, head of G10 FX strategy at CIBC Capital Markets.

“Ultimately, we will see this Norges bank hawkishness played out via euro-nokkie trending back lower towards mid 9.90s in the next month or two,” he said.