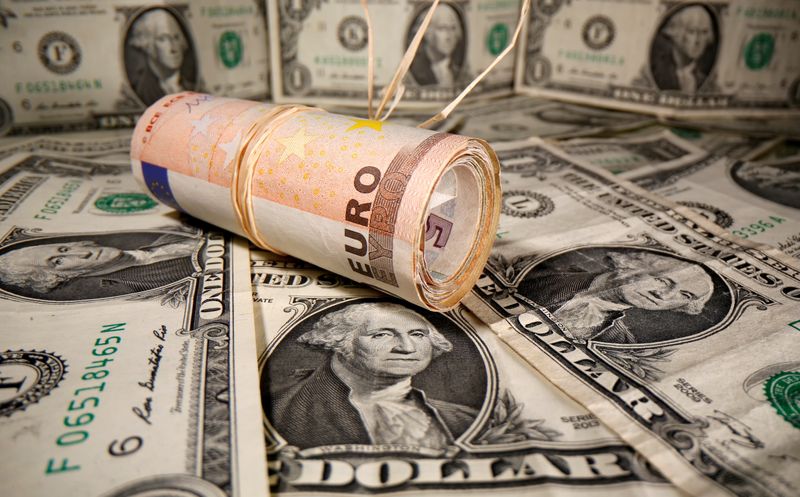 LONDON (Reuters) -The U.S. dollar fell on Wednesday after Federal Reserve Chair Jerome Powell said in remarks prepared for Congress that the economy was “still a ways off” from levels the central bank wanted to see before tapering its stimulus support.

His comments came a day after data showing U.S. inflation at its highest in more than 13 years sent the greenback to three-month highs and sharpened the focus on when the world’s central banks will start withdrawing pandemic-era stimulus.

That focus intensified after the Reserve Bank of New Zealand said on Wednesday it was ending bond purchases, raising expectations it could increase rates as soon as August.

The Bank of Canada too is expected on Wednesday to further taper bond-buying after it reduced weekly purchases in April.

Powell’s two-day testimony starts later on Wednesday but his pre-prepared comments show the Fed is firm in its belief that current price increases, despite the concerns they are raising about unmoored inflation, are tied to the reopening of the economy and will prove fleeting.

He said the Fed would continue to deliver support “until recovery is complete”.

Against the euro, it slipped to $1.1823, having earlier touched its highest since April 5.

“It’s not surprising as Powell tries to reflect the consensus in the FOMC and he is repeating what the FOMC has been saying. At the last meeting they said substantial progress is still necessary,” Commerzbank (DE:) strategist Thu Lan Nguyen said.

“We are seeing this correction in the dollar but I think the disappointment will be short-lived.”

The dollar rose almost 3% last month after the Fed’s hawkish pivot forced markets to re-assess when tapering and rate rises might start. It firmed 0.6% on Tuesday after the inflation data.

The meanwhile soared against the greenback after New Zealand’s central bank announced it would cut short a NZ$100 billion ($70 billion) bond-buying programme. It added to the gains after Powell’s comments, standing 1.4% higher.

Analysts have brought forward calls for a rate rise to as early as August, which would put New Zealand at the forefront of countries to raise interest rates.

The divergence in monetary policy outlooks pushed the Australian dollar 0.7% lower against its New Zealand counterpart to NZ$1.0645, the lowest since early June.

Later in the day, the Bank of Canada (BoC) will taper asset purchases by C$1 billion a week, a Reuters poll of economists forecasts. The consensus is for the BoC to raise interest rates by 25 basis points to 0.50% in the final quarter of 2022

The Canadian dollar firmed 0.5% against the greenback.