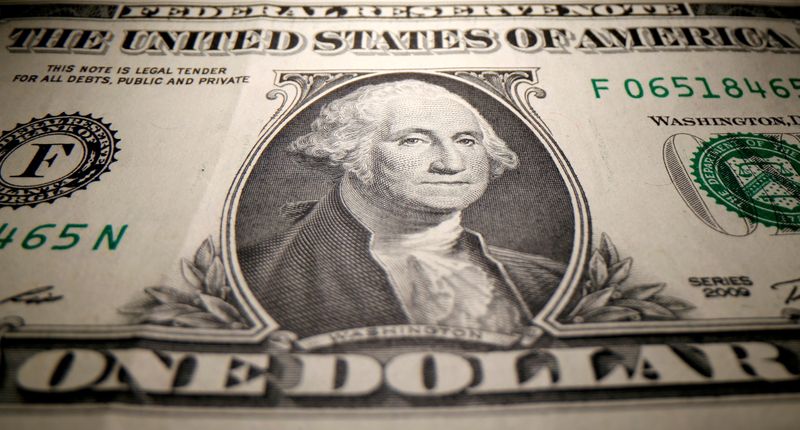 LONDON (Reuters) – The dollar was set to end the week with small gains after a turbulent few days when currencies were buffeted by shifting risk appetite, with the market’s focus now on next week’s U.S. Federal Reserve meeting.

But that was off a 3-1/2-month high of 93.194 hit on Wednesday, after strong Wall Street earnings helped investors regain some of the confidence lost to earlier worries the Delta variant of the coronavirus could derail the global economic recovery.

“The heavily European-weighted dollar index remains pretty close to its recent highs at 93.00, which is a good performance given the bearish re-assessment of US and global growth prospects that have taken place over the last month,” ING strategists Chris Turner, Petr Krpata and Francesco Pesole said in a morning note.

“Dollar bulls will feel comfortable that the dollar out-performs on both a global recovery – where the Fed looks poised to begin policy normalisation – and during periods of risk aversion when commodity and EM (emerging market) currencies get hit.”

Meanwhile, the euro traded flat over the period at $1.1772, unmoved by mixed French and German purchasing manager surveys. Surveys for the euro zone as a whole are due at 0800 GMT.

The European Central Bank on Thursday pledged to keep interest rates at record lows for even longer, as widely expected.

ECB President Christine Lagarde, in her media briefing, said a fresh wave of the coronavirus pandemic could pose a risk to the region’s recovery, although she did offer a more balanced economic outlook.

While most analysts see the ECB’s dovish pivot as weighing on the single currency, those at TD Securities say it could push up to $1.1851 in the near-term.

“The lack of hints on future policy moves is a moderate disappointment to those looking for a stronger dovish signal,” they wrote in a research note.

The market’s next major focus is the Federal Reserve’s two-day policy meeting that wraps up on Thursday. Since the previous meeting on June 16, when Fed officials dropped a reference to the coronavirus as a weight on the economy, cases are spiking.

Many economists, however, still expect the meeting to produce some advancement in the discussions for a tapering of stimulus.

The British pound recovered from losses as steep as 1.3% for the week to trade just about flat at $1.3741, buoyed by the recovery in risk sentiment even with COVID-19 cases broadly on the rise.

However, Australia’s dollar – often viewed as a proxy for risk appetite – slid 0.3% to $0.7360 on Friday and was headed for a 0.5% drop on the week, which would be a fourth straight weekly loss.

With half the Australian population languishing under lockdown, economists speculate the country’s central bank could increase stimulus rather than decreasing it at its next policy meeting.

“The balance of risks point to more weakness in AUD in the near term,” Commonwealth Bank of Australia (OTC:) strategist Joseph Capurso wrote in a client note.

Pound Gains Against Dollar as BoE Reins in Bond Tapering Threshold By Investing.com