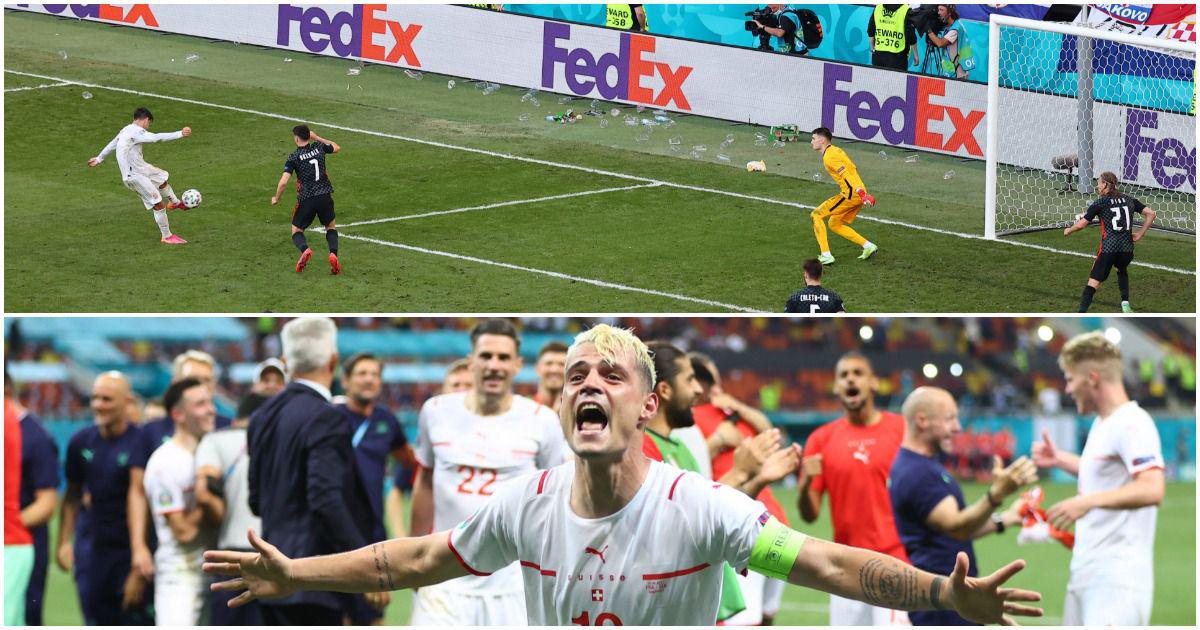 The best of scripts drop the hook on the watchers nice and early. It reels you in, makes you drop everything else you are doing. The genre doesn’t really matter, what matters is it managed to catch your attention.

And so, on a night of incredible drama at Euro 2020, the hook came in the 20th minute of the round of 16 match between Croatia and Spain. The venue was, of course, Copenhagen where a script worth of a Hollywood blockbuster had already unfolded in the group stages.

We had already seen one goal from near the half-way line at the tournament, and an incredible one at that. It was time for a second, equally incredible goal, but at the opposite end. Once again there was a goalkeeper who was left embarrassed… this was not a “Holy Schick” moment.

Unai Simon, the Spanish goalkeeper, miscontrolled a back-pass and as he was realising the horror that is unfolding, one of the camera angles showed Croatian players not even looking at the direction of the goal. As far as gifts go, this was the greatest surprise for them. In the entire history of the European Championships, a total of 18 own goals have been scored and this was the ninth at Euro 2020 alone.

And so, we got hooked. It could not have possibly prepared us for what was to follow that night, but it was the first sign from footballing heavens: “Watch on, for the madness is about to begin.”

Spain duly remembered that they were an exciting attacking side and, after scoring five — including a gift from the opponent goalkeeper ironically — in their previous match, they went about their business of playing attacking football and converted a chance in the 38th minute. Croatia too, had their chances. At half-time, the score was 1-1. Fair enough. Spain would even go on to take a 3-1 lead around the 80-minute mark and it was deserved.

But 15 minutes later, the scores were 3-3 and we could barely believe our eyes. Croatia, the World Cup finalists, found something in their reserves and gave us 30 more minutes of a match that had already had everything: from amateur errors to high-quality football.

And while the scoreboard will tell you all about the goals scored, it wouldn’t tell you that in the 96th minute, Unai Simon had a moment of redemption at the very end where he would have wanted the pitch to open up and swallow him whole. He punched his fist after a reflex save that kept the scoreline 3-3 and soon after, Spain would have the decisive lead.

A moment of magic too, mind you. Alvaro Morata has been subject to criticism for his wastefulness in front of goal — valid or not, some of it definitely vile — but he chose to step up in grand fashion. A first touch for the ages, and a confident finish.

And so things came to a close in Copenhagen, with Spain dancing for joy in Denmark.

The World Champions are in action. And up against a squad filled with flair and world-class talent was a Swiss side that was all about efficiency. Didier Deschamps is often criticised for not quite unleashing the full potential at his disposal, and his tactical tweaks did not quite work in the first half as Switzerland, much like Croatia, took the lead against their fancied rivals. Indeed, it should have been 2-0 but Switzerland failed to convert a penalty at one end and paid the price at the other.

France remembered then that they had enough in their armoury to outplay their opponents. Paul Pogba was conducting an orchestra from the midfield and soon those ahead of him started swaying to his tunes. First up, Karim Benzema produced a piece of incredible skill — intentional or otherwise, there is no doubting the wow factor of it — and then, he scored the classic poacher’s goal that saw build-up play of the highest quality.

Pogba would soon have his moment under the spotlight and boy, what a moment. With unerring precision, he found the corner of the net that no goalkeeper is ever getting to. World Champions, winning with swagger.

Well, the Swiss weren’t done though. As a fan, who is now the face of the tournament arguably captured perfectly, it went from agony to ecstasy. Switzerland capitalised on lax French defending and as the final whistle went, it was 3-3. There was even a moment seconds before that where France could have won it but for the crossbar preventing Kingsley Coman — another moment of beautiful chaos that you wouldn’t find on the scoresheet.

The next 30 minutes were largely uneventful but Kylian Mbappe should have made sure France had it sealed in extra time. Another delightful Pogba through ball, another moment of miscontrol by Mbappe. And you wondered. Was it not meant to be his night?

Yann Sommer made a couple of saves too and the inevitable happened. When the penalty shootout arrived Swiss captain Granit Xhaka gathered his troops around and gave a speech that would have stirred excitement even among the neutrals. You couldn’t have possibly understood what he said, but it was dripping with passion that first permeated to his chest-bumping teammates and even spilled over the television screens into your living room. Perhaps at that moment, you felt it was their night.

Sommer guessed correctly, got his right hand out in time and the ball was palmed away. The celebrations erupted but had to be paused for a few moments. Had the goalkeeper stepped off his line? Was there going to be a retake? Sommer was urging his onrushing teammates to be calm and so was the assistant referee at the halfway mark but the Swiss players were not to be stopped. The save, indeed, was deemed valid and it gave us a photograph that spoke as much as these words do.

The night that started with a mistake by Spain’s goalkeeper ended with a missed penalty by arguably the greatest talent of this generation. Between those two moments of misjudgement, the football gave us a record-breaking, internet-breaking, template-breaking and heart-breaking (for some) night of football. Knockout football in major tournaments is meant to be cagey, with teams mindful of not making errors and putting efficiency and effectiveness ahead of flair. But on this night —June 28 2021 — Copenhagen and Bucharest witnessed two high-stakes matches, back-to-back, that brought to us football action that might be hard to replicate in the years to come.