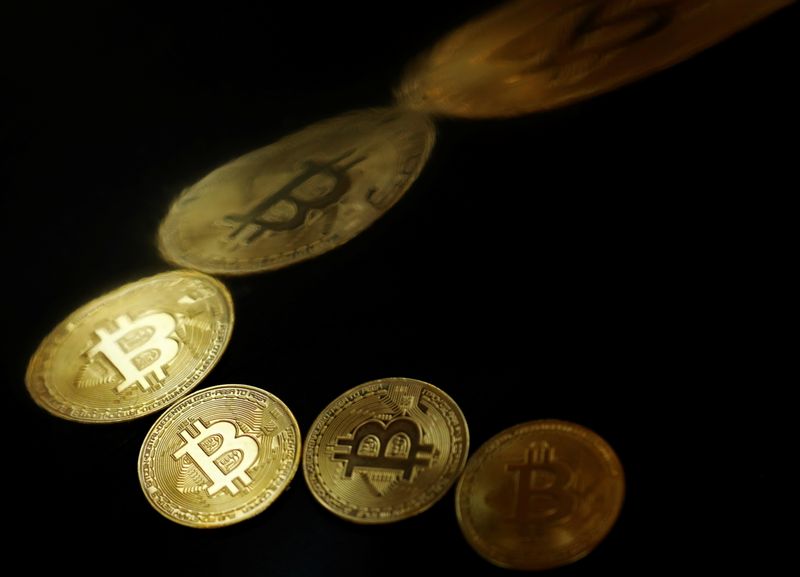 © Reuters. FILE PHOTO: A representation of the virtual cryptocurrency Bitcoin is seen in this picture illustration taken June 14, 2021. REUTERS/Edgar Su/Illustration

ASUNCION (Reuters) – In the wake of El Salvador’s dramatic move to make bitcoin a legal tender, a world first, the internet has been buzzing with rumors that another Latin American country may be set to follow in its footsteps: Paraguay.

Those may be somewhat off the mark.

Paraguayan lawmaker Carlos Rejala, who had inadvertently sparked the excitement with a tweet https://twitter.com/carlitosrejala/status/1405582533144809476?ref_src=twsrc%5Etfw%7Ctwcamp%5Etweetembed%7Ctwterm%5E1405582533144809476%7Ctwgr%5E%7Ctwcon%5Es1_&ref_url=https%3A%2F%2Fwww.euronews.com%2Fnext%2F2021%2F06%2F22%2Fis-paraguay-set-to-become-the-second-country-to-make-bitcoin-legal-tender-after-el-salvado earlier in June, told Reuters on Friday he was pushing a bill to regulate cryptocurrencies, not make them legal tender.

“It is a bill of digital assets and it differs from that of El Salvador because they are taking it as legal currency and in Paraguay it will be impossible to do something like that,” centrist legislator Rejala said.

Earlier in June, linking to a story about a local entertainment firm planning to accept cryptocurrencies, Rejala had tweeted: “This is Paraguay. July we legislate! #Bitcoin”, which some media and twitter users had picked up on.

The 36-year-old, who leads a small political party with a total of four seats in Congress, is now seeking to rally support to pass his bill regulating the digital assets. He is working on three drafts of the law he intends to present on July 14.

El Salvador’s President Nayib Bukele said on Thursday that a recently passed law making bitcoin legal tender will take effect on Sept. 7, making the Central American nation the first country in the world to take such a step.

Bukele has said he is confident the project will be a success and could be a “leap forward for humanity” even though the World Bank has declined to offer technical support and the International Monetary Fund has expressed concern.

In Paraguay, Rejala said that despite not having anything like a majority in Congress, lawmakers with other parties were interested in his proposal and he was confident of approval.

“We want the regulators and banks to also participate so that Paraguayans or foreigners can operate with these assets legally, because we know that illegal transactions exist here and in other countries,” he said.

“We want to be a crypto-friendly country.”