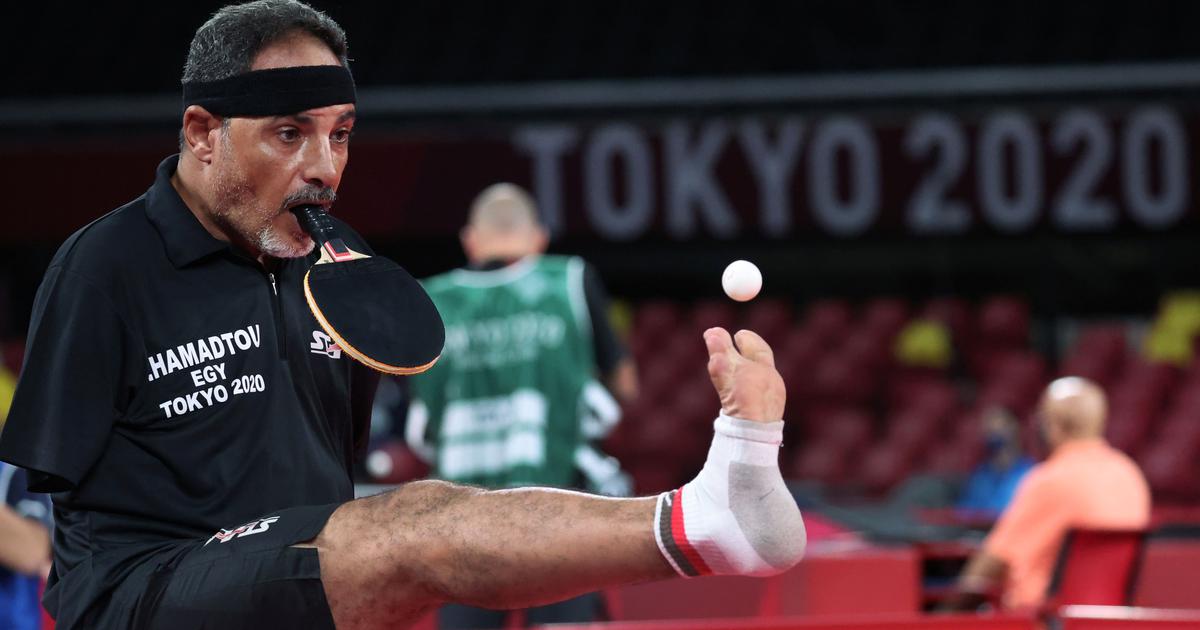 In 2014, a video of Ibrahim Hamatdou posted by the table tennis governing body on YouTube garnered widespread fame on the internet.

The Egyptian table tennis player was invited to be among the best players in the world at 2014 World Team Table Tennis Championships in Tokyo, Japan.

In the snippet titled Nothing is Impossible, Hamadtou – who lost both his arms in a train accident when he was 10 – had said, “It is a big reward for me to watch the best players in the world in Tokyo, and I hope this shows nothing is impossible as long as you work hard.” As shown in the video, he got a chance to hit a few rallies with some of the best in the world, including the legendary Chinese paddler Ma Long.

On August 25, 2021 – the first day of events at the Tokyo Paralympics – Hamadtou was in action in the Japanese capital again, making his second appearance at the quadrennial mega event.

At Rio 2016, provided Hamadtou was one of the most inspirational images of the Games, with his gameplay of holding the racket between his teeth and flicking the ball up with his foot to serve.

“I was trying first to use the bat under the arm, and I also tried using other things that weren’t working so well,” Hamadtou had said. “Finally, I tried using my mouth.”

Sport classification: 6 (In table tennis classes 1-5 are for wheelchair athletes. Classes 6-10 are for standing athletes. Finally, class 11 is for athletes with intellectual impairments. Within the wheelchair and standing classes, the lower the number, the greater the impact the impairment has on an athlete’s ability to compete)

He was 43 when he made his dream come true of participating at the Paralympics. He made his international debut in 2004.

“I fell in love with table tennis in 1983 after losing both arms as a result of a train accident. So I started the sport after the accident,” Hamadtou is quoted as saying by ITTF. “I was in the club where I was officiating a match between two of my friends. They disagreed on a point, when I counted the point in favour of one of them the other player told me, do not interfere as you will never be able to play. It was that statement that fired me up to decide to play table tennis.”

“Competing in his first Paralympic Games since he started Para table tennis at the international level in 2004, Hamadtou was hailed a legend by his competitors and fellow athletes. Although not making it through the group stage, the Egyptian’s attitude and style of play truly demonstrated the essence of Paralympic sport,” read a report on the official website of the Games in highlighting the moments of 2016.

He started his campaign in Tokyo with a defeat in the group stage but will hope to win the second match and progress to the knockouts for the first time. “After today’s game, the loss tastes bitter,” he told World Table Tennis after defeat in straight games by Korea Republic’s Park Hongkyu (11-6, 11-4, 11-9). “I don’t even have anything to say. I played and performed well, and I thank God for that. I started preparing immediately after Rio for Tokyo 2020. It was a tough period, I worked hard in as much so I can and hopefully will have better results.”

Here are highlights of him playing at the Rio Games:

In India’s double dream run to last four, a common theme of self-belief and grit