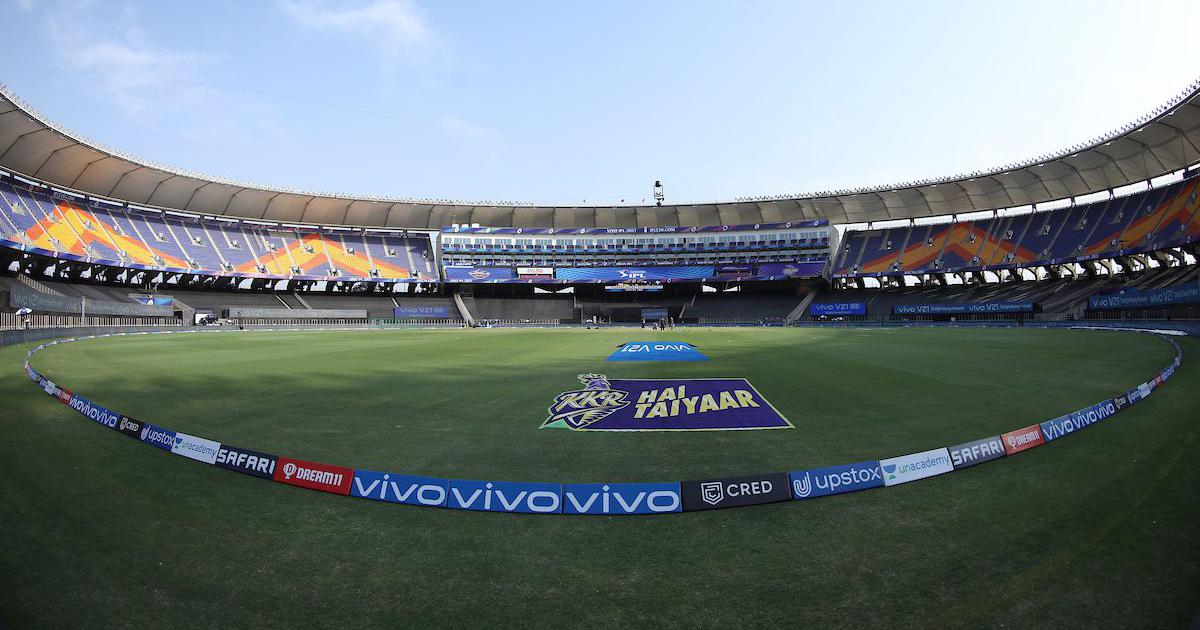 Two members in the Kolkata Knight Riders camp have tested positive for Covid-19 and the team’s match against Royal Challengers Bangalore to be held in Ahmedabad on Monday has been rescheduled, the Indian Premier League announced.

“Varun Chakaravarthy and Sandeep Warrier were found to be positive in the third round of testing in the last four days. All other team members have tested negative for Covid-19,” the IPL said in a statement.

This is the first reported case of a positive test inside the teams’ bio-secure environments. While there have been positive cases in relation to the IPL earlier, those were before players entered the bio-secure bubbles and were able to isolate themselves during the quarantine period.

According to ESPNCricinfo, Varun, one of the members who has tested positive, had gone to a hospital recently for a shoulder scan. The leg-spinner and pacer Warrier, both 30, have been isolated. Of the two, Warrier has not yet made the playing XI in any of the seven matches KKR have played while Varun has been an integral part of the side.

“Both the players have isolated themselves from the rest of the squad. The Medical Team is in continuous touch with the duo and are monitoring their health. Meanwhile, the Kolkata Knight Riders have now moved towards a daily testing routine to identify any other possible cases and treat them at the earliest,” the statement by the league added.

“The Medical Team is also determining the close and casual contacts of the two positive cases during the 48 hours prior to collection of the sample that returned the positive test results.”

Earlier, a report by The Age, an Australian publication, had stated that the Kolkata Knight Riders team was isolating after players fell ill. The development was then confirmed by the league.

KKR last played on April 29 against Delhi Capitals at the Narendra Modi Stadium.

“Now, the DC players will also have to be tested and every member of the team contingents that came in contact with Chakravarthy and Warrier will also be contact traced through the app watch that has been given to everyone,” a BCCI source told PTI.

According to IPL’s Standard Operating Procedure for Covid-19 management, any close contact of an infected person has to isolate for six days and return three negative tests on days one, three and six, PTI reported.

The Chennai Super Kings team, which is currently in Delhi but was part of the bio-bubble that included KKR camp in Mumbai, is also awaiting reports of its players who came in contact with Varun. The two teams had met on April 21 at the Wankhede Stadium during the Mumbai leg before moving to their current destinations.

“All CSK players who have been in touch with [Varun] Chakravarthy have been tested as per contact tracing protocols. We are awaiting reports,” CSK CEO Kashi Viswanathan told PTI.

India is in the midst of an unprecedented second wave of Covid-19 and the health-care infrastructure across the country struggling to cope with the case load amid shortage of oxygen supply and essential medicines.

The IPL is being played inside a bio-secure bubble and with teams playing at only two venues at a given time. The two cities currently in operation are Delhi and Ahmedabad, both hit by the pandemic, and there have been questions over the tournament continuing especially in the national capital. A few players and officials have withdrawn from the event.

Here are the helpline numbers for states and the Union Territories

The first mobile phone call was 75 years ago. Here’s how the tech evolved to become mainstream