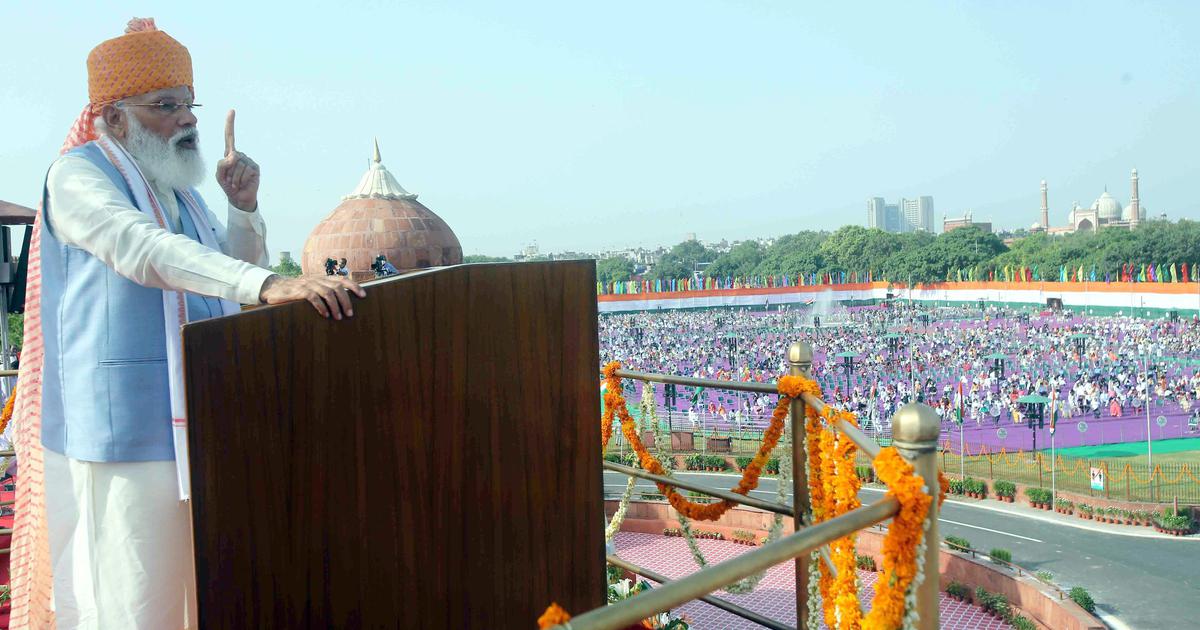 The infrastructure programme, called “Gati Shakti”, will boost the Indian economy, Modi said from the ramparts of the historic Red Fort in Delhi.

Many social media users, including Congress spokesperson Randeep Surjewala, posted videos of his earlier speeches and criticised him for rehashing the same scheme for three years in a row.

“We have decided to invest 100 lakh crore rupees for modern infrastructure in this time period,” the prime minister had said in 2019. “This will generate employment, will develop new systems and various aspirations will be met.”

In 2020, Modi gave a name to the programme – the National Infrastructure Pipeline Project – and said that Rs 110 lakh crore spent on it will provide “fresh momentum to the overall infrastructure development of the country”.

A number of other announcements made by Modi on Sunday were also related to schemes and initiatives that are already in place, The Hindu reported.

The then Minister of State for Defence Shripad Yesso Naik had said that the decision to admit girls in all 31 sainik schools will be implemented in a “time-bound action plan”. In March, the government announced that all girls will get admission in all sainik schools from the academic session 2021-’22.

Modi announced the government’s plans to fortify rice with iron and vitamins before distributing it in ration shops and at schools for the mid-day meal scheme. However, former Food Minister Ram Vilas Paswan had announced a pilot project for distribution of fortified rice in 2019.

The National Hydrogen Mission, which the prime minister said would make India a global hub for the production and export of the gas, was also announced by Finance Minister Nirmala Sitharaman in her Budget speech this year, The Hindu reported.

On Sunday, Congress MP and Leader of the Opposition Mallikarjun Kharge said that the country had been listening to same speeches from the prime minister for seven years.

“He announces new schemes but these are never implemented or seen on the ground…He says a lot of things but never adheres to them,” Kharge told reporters.