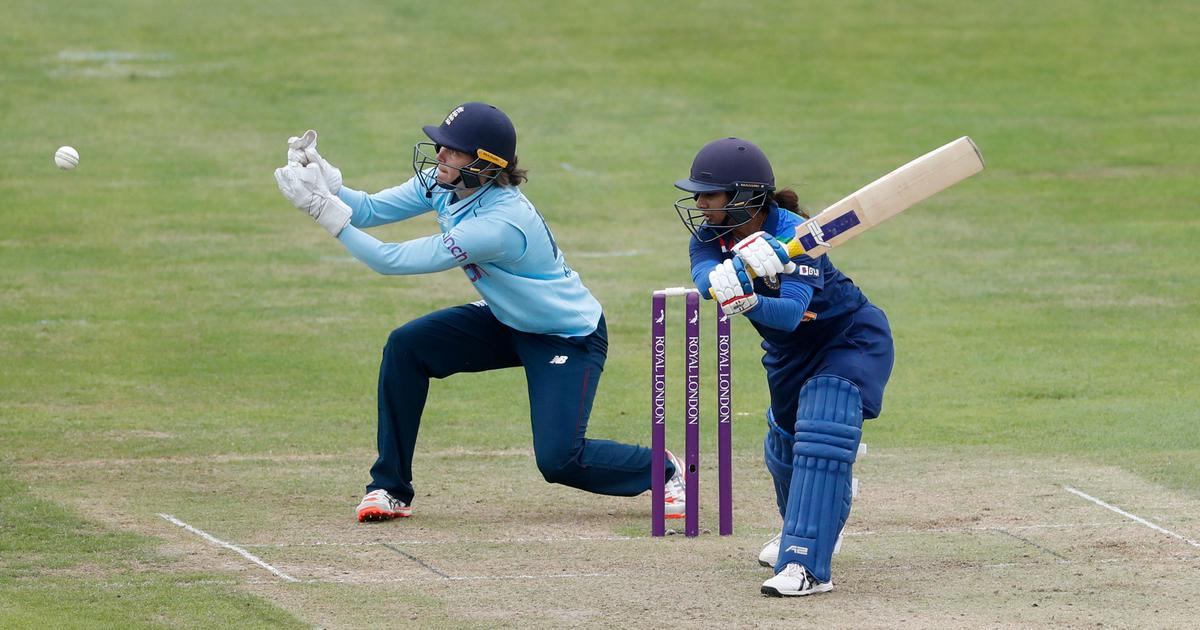 Skipper Mithali Raj’s half-century wasn’t enough as England rode on Tammy Beaumont and Nat Sciver’s aggressive unbeaten fifties to defeat India by eight wickets in the first ODI of the three-match series in Bristol on Sunday.

Mithali scored a patient 72 to guide India to a modest 201/8 after being put in to bat but it was a batting performance that left a lot to be desired collectively. Despite not being at her fluent best, India captain’s innings offered some respectability to the total as the team did not recover from two early dismissals. Mithali shared two partnerships – 56 runs with Punam Raut (32) and 65 with Deepti Sharma (30) – to help India go past the 200-run mark.

But England cantered home with 91 balls to spare, thanks to opener Beaumont (87 not out off 87 balls) and Sciver’s (74 off 74) unbroken 119-run third-wicket partnership that came off just 19 overs.

England never took the foot off the pedal in the chase even as they lost Lauren Windfield-Hill (16) early in their chase. Beaumont and skipper Heather Knight (18) shared 59 runs for the second wicket to get the hosts back on track.

But Knight fell prey to a lovely delivery from left-arm spinner Ekta Bisht (1/55) that turned just enough after pitching to beat an onrushing England skipper’s bat and disturb the timbers.

Sciver, however, did not let Bisht to settle down as she pulled and drove straight past the bowler for two boundaries in the spinner’s next over.

Beaumont continued her aggressive intent and brought up her fifty in 48 balls by sweeping Deepti Sharma to the square-leg boundary.

The Indians had another chance to get back into the match but Bisht dropped Sciver at short fine-leg in the 20th over off Harmanpreet Kaur’s opening over.

The Indians lacked discipline in both fielding and bowling as pacer Shikha Pandey bowled two consecutive no balls in the 28th over, the second of which was clobbered by Sciver past mid-on to the boundary.

It was a lost cause for the visitors as Beaumont and Sciver found boundaries at will to take England home with consummate ease, reaching 202 for eight in 34.5 overs.

Earlier, India’s start was far from impressive as the visitors lost both the openers cheaply.

Teen sensation Shafali Verma’s much-anticipated ODI debut lasted 14 balls from which she scored 15 runs with the help of three fours.

Shafali, who became the youngest Indian cricketer to make debut across formats on Sunday, perished in search of one big shot too many when she miscued a Katherine Brunt (2/35) delivery to Anya Shrubsole at mid-on in the fifth over. But even in her brief stay, she showed more intent than the rest of the batting unit combined.

Smriti Mandhana (10) followed soon when Shrubsole (2/33) went through her defence before Punam and Mithali resurrected the innings, albeit at a painstaking pace. India’s first powerplay score was a massively underwhelming 27/2 even if the conditions were overcast at the start of play.

After the early dismissals, both Punam and Mithali played cautiously and were part of the reason why India’s innings had 30 overs worth of dot balls, an area that the Indian captain admitted that needs to be addressed.

When the partnership was just starting to flourish, Punam departed by handing a simple catch to Sophie Ecclestone off Kate Cross.

India vice-captain Harmanpreet Kaur’s (1) poor form continued as she didn’t trouble the scorers much, sneaking one to Amy Jones off Ecclestone (3/40).

It was a struggle for experienced campaigner Mithali early on. She found boundaries hard to come by, notching up her fifty in 95 balls with a four off Shrubsole. Together with Deepti, Mithali then added 65 runs for the fifth wicket before the former was dismissed, LBW to Shrubsole.

But soon after Deepti’s dismissal, Mithali changed gears and hit three boundaries in an over, slicing and lofting Shrubsole to amass 15 runs off the 44th over. Just when Mithali was looking dangerous, Ecclestone got rid of her in the 46th over as India slumped to 180 for 6.

Shikha Pandey (3) and Jhulan Goswami (1) remained unbeaten to help India get past the 200-run mark but once again India’s lack of dynamism in batting came back to haunt them.

“We lacked intent in all three departments,” a frustrated Mithali said after the match.

“Could have had another (batter) from top five stay there and get some runs. The bowlers could have been more consistent in their lengths, and our fielding needs a lot more effort.

“England have a very experienced bowling attack, they are in their conditions and know which lengths to bowl. We’ll come prepared and show a bit more intent next game.”

The defeat marks another setback for India in their World Cup preparations as they lost the ODI series at home against South Africa rather convincingly. It was another sign that the 2017 runners-up have work to do.

When India lost their first wicket, the anchors were dropped. It was great bowling by the hosts too, of course, but there is a difference from batting to score runs and batting to stay in the middle. When England lost their first wicket, they kept looking for gaps whereas India completely shut shop. The batting collapses of the past play a role there too as Mithali is all too aware of the lack of depth in the batting. But given that was evident in the South Africa series, India did nothing to address it here and instead went with a batting lineup where there is hardly any depth below Deepti.

If they are so willing to, there is so much to learn for the Indian batting lineup from this England batting display. This Indian batting unit, without wholesale personnel change, is actually more than capable of finding another couple of gears. But they need to change their blueprint and do so soon.

“Our batting line up needs to fire at some point,” Mithali added in the post-match press conference, according to PTI.

“Over the years we are far more comfortable chasing than posting targets. We need to work on that, we need to know how to get 250,’ she said.

“But we just cant go bang bang and lose wickets. We need to know when to push the acceleration and how to get that.”

The second ODI of the series is on Wednesday.